The Beauty in Every Inch 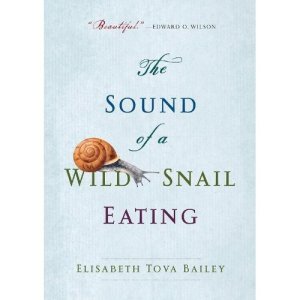 The Sound of a Wild Snail Eating

The Sound of a Wild Snail Eating

Most of us are too busy to spend a year watching a snail go about its business.  We might equate such activities with watching the grass grow or paint dry.  How fascinating could the daily exploits of a gastropod possibly be, after all?

Elisabeth Tova Bailey, however, found herself with little else to do.  Bedridden due to a mysterious autonomic ailment, Bailey found herself unable to even sit up or turn over without a major effort.  A friend visited her one day, bringing a pot of field violets from the nearby woods – and, as a bonus, a woodland snail.

With literally nothing else to do or watch, Bailey began to notice the habits of her new companion.  From its eating and sleeping habits to its methods of locomotion, her observations began to open a window into her tiny companion’s world.

This is a beautiful little volume, illustrated with pencil drawings of snails going about their daily business on most pages.  Her bedside observations are supported by in-depth research and expert opinions.  Turns out, there are a lot of benefits to being a snail that I had never considered.  Apparently, a snail has multiple rows of tiny teeth, numbering in the thousands(!).  Even more incredible is that when one row gets worn down, a new one is added at the back, and they all shift forward to replace the spent teeth.

With only thirty-two adult teeth, which had to last the rest of my life, I found myself experiencing tooth envy toward my gastropod companion.  It seemed far more sensible to belong to a species that had evolved natural tooth replacement than to belong to one that had developed the dental profession. (49-50)

What I found most intriguing about the year spent cohabiting with a snail was that it laid eggs in the terrarium she set up for it, and most (if not all) hatched.  I don’t know about you, but I have never spent any time thinking about snail reproduction.  The particulars held me captivated: Snails are hermaphroditic, spend 7 hours in a single mating session, and can hold the resulting sperm for months or years, waiting for the right conditions to lay eggs and self-fertilize them.  It also seems that Bailey may be the only person to have observed a snail tending to its eggs, as this behavior has not been recorded in the wild.  (Snail eggs are laid and then left to fend for themselves.)  As such, her observations have added to the store of knowledge about these critters, a remarkable if unexpected result.

This memoir balances observation, research, personal adversity, and introspection.  It poses questions I have never considered, such as: How have snails migrated across vast distances?  How have these creatures survived longer than almost any other species?  Could a snail outpace a glacier?  It’s not overtly inspirational or touchy-feely; just a short, sweet retrospect look at an unlikely friendship.

Side note: Every time I picked up this book to read another vignette, the song “Snails” by the now-defunct band The Format started playing in my head.  I couldn’t help it.  So I stole the title of this post from the lyrics, and I present an acoustic version for your viewing pleasure.