Party Wolves in My Skull by Michael Allen Rose

You probably haven’t heard of Bizarro Fiction. I know I hadn’t.

As an established genre, Bizarro is a relatively new concept, though the form and ideas have been around for a long time. As the official Bizarro website states, ‘Bizarro, simply put, is the genre of the weird.’ Combining logic of the absurd with twisted, occasionally pornographic, and always macabre themes, it brings to mind the writings of Christopher Moore, Franz Kafka, and even Lewis Carroll, just to name a few.

Since it is such a new genre, Bizarro is always looking to further the art form and release new talent on an unsuspecting world. One of the eight books released this year by the New Bizarro Author Series, Party Wolves in My Skull by Michael Allen Rose is a shining example of what it means to be shelved in the Bizarro section.

END_OF_DOCUMENT_TOKEN_TO_BE_REPLACED

The Road by Cormac McCarthy 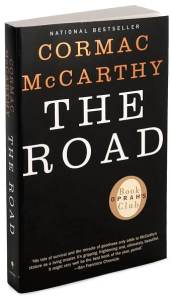 First of all, please don’t think I picked this book up because of the Oprah endorsement. I’m made of meatier things than can be swayed by an Empress. But when it comes to Viggo Mortensen, I’m JELLY. It might have something to do with his hair/face/body. Anyhoo, I remember seeing the cover of the book whilst shelving at the unnamed bookstore I worked for and thinking, “Oh, Viggo, when will we stop playing these games?” At around the same time my brother saw No Country for Old Men and was all, “I’m scared to sleep alone.” That movie being based on a McCarthy book paired with Viggo on the cover of THIS book slayed me. So I began the reading.

And let me tell you. It is not a happy read. Clinically depressed people and people prone to over-sympathizing, stay away. You will not have a happy thought for days. Not exaggerating.

END_OF_DOCUMENT_TOKEN_TO_BE_REPLACED

The Postmortal by Drew Magary

This book starts with hypotheticals.  What if you didn’t have to grow any older, but could freeze your body’s aging process and stay exactly the same age as you are today?  (Your current position on the aging spectrum might affect your answer to that one.)  Now — what if everybody had access to this cure for aging?  What might a society of perpetual 20-somethings look like?  How would religion, politics, and social mores change as a result?  And how terribly wrong could it go?

I love the premise of this book.  John Farrell is 29 years old in 2019, the not-too-distant-at-all-future, when the cure for aging is discovered.  Initially illegal in most countries, Farrell has the right kind of connections to get access to the cure on the black market almost immediately.  It is important to note that this cure is only for aging itself — which means it is not the same thing as immortality.  You can still die of cancer, or a car crash, or a nuclear bomb.  You just can’t die peacefully in your sleep of old age.  Within a few years the ban is overruled, and society at large jumps at the chance to stay young forever.

END_OF_DOCUMENT_TOKEN_TO_BE_REPLACED

Have you ever felt haunted by a book that wanted you to read it, no matter what?  The wonderfully-titled Miss Peregrine’s Home for Peculiar Children followed me around for a couple of weeks, then appeared in my house under suspicious circumstances.  Which is to say, it was recommended to me on various websites, by word of mouth, and I saw it reviewed all over the place.  But I resisted, and wasn’t sure that I really wanted or needed to read it.  I wish I could remember what finally convinced me to pick it up, or where or when I finally bought it.  All I can say for sure, however, is that it made its way into my home, at the very top of my TBR, and I’m grateful that it did.

This book takes a series of odd (or let’s say “peculiar”) vintage photographs and builds a narrative around them.  The concept works so well that it becomes entirely plausible to consider the pictures as proof of the story, instead of merely a jumping off point for spinning this yarn.  In truth, I would have been fascinated by the book if it was just a collection of strange and creepy photographs with whatever limited information about their origin was available.  (The photos all come from personal collections, mostly cultivated through flea markets and other somewhat anonymous sources, so there is probably very little solid information available on any of them.)  In some cases you can guess at the techniques used to create an image of an invisible boy, or a girl trapped in a jar, or a young man lifting a large boulder with one hand.  Though I still found it impressive in an age when “dodge and burn” was not achieved by a mouse click in Photoshop.  Other of the photos are not as easy to explain away, and I spent more time than I care to admit just staring at them in amazement.

END_OF_DOCUMENT_TOKEN_TO_BE_REPLACED

John Connolly is the internationally bestselling author of 14 books (15 later this year).  He is one of our favorite authors around these parts, mostly because his books are some of the best we’ve read, but also because he was kind enough to hold a signing at our store (back when we had a store in which to do that kind of thing).  He graciously agreed to answer some questions for our blog about his newest book, Hell’s Bells, released in the UK earlier this month.  (It will be out in the U.S. in October as The Infernals, but you’ll want to get your hands on it as soon as possible.)

[Booksellers Without Borders]: Why should anybody buy your book?

[John Connolly]: I have no idea why anyone picks one of my books over another.  I feel I should cling to their legs in an embarrassing show of excessive gratitude if, and when, they do.  That’s not false modesty: most authors have this weird ego/self-doubt inner battle going on.  When it comes to The Infernals/Hell’s Bells, or, indeed, The Gates, the answer is the same as for any other of my books: because I’ve done my best to ensure that you put the book down when you’ve finished it and think, gosh, that was actually kind of fun. I wouldn’t mind doing that again…

END_OF_DOCUMENT_TOKEN_TO_BE_REPLACED

Posted by Booksellers Without Borders on May 22, 2011 in Author Interviews

Geektastic: Stories from the Nerd Herd

Here’s the back story to this YA anthology: Editors Holly Black and Cecil Castellucci were at Comic-Con 2007 and got to talking about how many Jedi and Klingons were present at such conventions.  They thought it would be fun to write a story about a Klingon and Jedi who wake up together after a late night partying.  Awkward “morning after” meets forbidden geek love.  Except, who would publish such a story for them?  The obvious answer was to contact other geeky YA authors and create an anthology to be this story’s home.  Contributors include Libba Bray, Cassandra Clare, John Green, David Levithan, Garth Nix, and Scott Westerfeld.

If the premise of said story sounds hilarious to you, buy/borrow/steal this book today.  If you are confused or bored, it’s probably not for you.

The stories and comics in this anthology cover a wide range of geeks: Sci fi / fantasy; theater and band; role playing, video playing, and cosplaying; comics and graphic novels; and my favorite, the literature geeks.  I only fall into a few of those categories, but I understood the culture more than enough to enjoy these stories.

I was disappointed to find that a lot of geek stereotypes were upheld, including geeks being less attractive and popular than their non-geek counterparts.  Who says someone who is a geek in one area also has to be less athletic and deficient in personal hygiene?  Why is there always one token girl geek?  I won’t even get into the nomenclature of geek vs. nerd.  (I generally identify more as a nerd, but in the end it doesn’t matter.)

END_OF_DOCUMENT_TOKEN_TO_BE_REPLACED

First a quick note: John Connolly’s latest book was released yesterday in the UK with the title Hell’s Bells.  In the US, it will be released in October under a different title: The Infernals.  Who can wait another 5 months, though?  I recommend ordering a copy from the UK today, although this should in no way interfere with your plans to buy the US edition in October.  You can thank me later.

Connolly is best known for his crime fiction series (starring PI Charlie Parker) and the previously-reviewed The Book of Lost Things.  The Samuel Johnson books, however, are more humorous and adventuresome and generally not as dark.  Read these with tongue fully in cheek!

Hell’s Bells is a sequel to The Gates, featuring a boy named Samuel Johnson and his trustworthy dachshund, Boswell.  In The Gates, the Great Malevolence and his minions tried to invade Earth, but found themselves thwarted by young Samuel, the ever-loyal Boswell, and a very minor demon called Nurd.  Hell’s Bells sees Samuel and Boswell lose the home court advantage as they are transported to Hell by a demon who has fallen out of favor after the failed invasion. Along for the ride are a group of notorious dwarfs, a couple of policemen, and an ice cream truck.  Throughout, Samuel’s ordinary life problems (divorced parents, unattainable girls, and the like) are superseded by the demons he encounters and the battles he witnesses.  His perseverance and continued good humor keep these books light, despite heavy subject matter.

END_OF_DOCUMENT_TOKEN_TO_BE_REPLACED

Posted by Recidivist Reader on May 13, 2011 in Book Reviews, Intermediate / Ages 8-12, Must Read, Recommendations