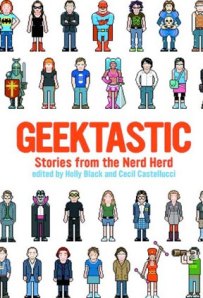 Geektastic: Stories from the Nerd Herd

Here’s the back story to this YA anthology: Editors Holly Black and Cecil Castellucci were at Comic-Con 2007 and got to talking about how many Jedi and Klingons were present at such conventions.  They thought it would be fun to write a story about a Klingon and Jedi who wake up together after a late night partying.  Awkward “morning after” meets forbidden geek love.  Except, who would publish such a story for them?  The obvious answer was to contact other geeky YA authors and create an anthology to be this story’s home.  Contributors include Libba Bray, Cassandra Clare, John Green, David Levithan, Garth Nix, and Scott Westerfeld.

If the premise of said story sounds hilarious to you, buy/borrow/steal this book today.  If you are confused or bored, it’s probably not for you.

The stories and comics in this anthology cover a wide range of geeks: Sci fi / fantasy; theater and band; role playing, video playing, and cosplaying; comics and graphic novels; and my favorite, the literature geeks.  I only fall into a few of those categories, but I understood the culture more than enough to enjoy these stories.

I was disappointed to find that a lot of geek stereotypes were upheld, including geeks being less attractive and popular than their non-geek counterparts.  Who says someone who is a geek in one area also has to be less athletic and deficient in personal hygiene?  Why is there always one token girl geek?  I won’t even get into the nomenclature of geek vs. nerd.  (I generally identify more as a nerd, but in the end it doesn’t matter.)

The stories also show teenagers engaging in questionable behavior (mostly involving alcohol and/or sexual encounters, including meeting people these kids fell in love with over the Internet with no adult supervision) without always showing the consequences of such behavior.  The stories also tend to end on a theme of “geeks are people, too” – but that is preaching to the choir.  Anyone who is interested in this book probably already knows that.

Still, overall it was fun to see the geeks come out on top, again and again.  The stories are littered with inside jokes from every type of fandom, requiring a level of geek literacy from the reader.  I found I had “geek cred” in at least a few areas, and learned more about others.

Recommended for anyone who read past the opening paragraph!  It kept me company late at night when I should have been sleeping, and parts made me laugh so hard I was afraid I might wake somebody up.