The Postmortal by Drew Magary 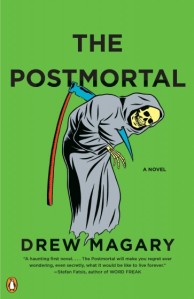 This book starts with hypotheticals.  What if you didn’t have to grow any older, but could freeze your body’s aging process and stay exactly the same age as you are today?  (Your current position on the aging spectrum might affect your answer to that one.)  Now — what if everybody had access to this cure for aging?  What might a society of perpetual 20-somethings look like?  How would religion, politics, and social mores change as a result?  And how terribly wrong could it go?

I love the premise of this book.  John Farrell is 29 years old in 2019, the not-too-distant-at-all-future, when the cure for aging is discovered.  Initially illegal in most countries, Farrell has the right kind of connections to get access to the cure on the black market almost immediately.  It is important to note that this cure is only for aging itself — which means it is not the same thing as immortality.  You can still die of cancer, or a car crash, or a nuclear bomb.  You just can’t die peacefully in your sleep of old age.  Within a few years the ban is overruled, and society at large jumps at the chance to stay young forever.

The story is told via blog entries, news articles, interviews, and headlines stored on Farrell’s wireless device and supposedly discovered in 2090 by a worker for the Department of Containment.  The epistolary nature of the narrative works well, giving a firsthand account from one of the early postmortals combined with outside sources, opinions, and news.  The political and religious backlash feel authentic, and though the specific pundits quoted are not familiar, there are a plethora of modern day parallels to compare them to.  Different sects show their disapproval of the postmortals in different ways, via terrorist acts, personal attacks, or the creation of a pacifist humanist church that wields a remarkable amount of power.  The interplay between these interest groups was complex, and watching power and moral principles in a constant state of flux was fascinating.

The problem I had with this book was twofold.  First, although almost all of the story is told by Farrell, I never felt particularly connected with him as a character.  For one thing, he didn’t seem to have much of a center.  When he gets the cure illegally, as an “early adopter,” he doesn’t waste much time thinking about whether or not it’s a good idea.  It exists, he has access to it, and so he becomes a postmortal.  He doesn’t have any particular reason for not wanting to age, other than the fact that nobody looks forward to getting old.  There’s just no purpose to it, or most of his life, frankly.  He loses so many important people along the way, and although you can tell it upsets him greatly, you never feel that grief.  Something about him just doesn’t translate as human.  Now, don’t get me wrong: I absolutely think that most people would get the cure for aging first and ask questions later.  I just wish we had a little more insight into his motivations throughout (as we do in a few specific instances).

The second problem I had was that although the premise of the cure was fairly well thought out and its repercussions well explored, there were still a lot of unanswered questions as I read.  Supposedly women who receive the cure for aging will get their periods forever, and be able to produce an unending supply of offspring.  Now, I haven’t taken biology since I was in high school a few (*cough*) years ago, but my understanding is that we are born with a limited supply of eggs.  It’s plenty to get through the average number of child-bearing years, but certainly would not be inexhaustible.  So you could live for hundreds of years, potentially, but I have a hard time believing you would continue menstruating and being able to reproduce.  Also, what about body parts that just wear down over time, separate from aging?  Every postmortal should be wearing dentures, just from natural wear and decay on their teeth over that period of time.  These aren’t big issues — and the big issues are aptly dealt with, to the ability of a book this length — but they nagged at me throughout.

I don’t want to discourage you from picking this book up, however.  It raises a lot of interesting questions and throws our impending future into sharp relief.  With a population that no longer ages and dies, overpopulation becomes an immediate and irrefutable problem.  Fuel, water, and food become scarce to nonexistent.  All of the problems we know are looming somewhere ahead come crushing forward, and the resulting chaos is riveting, if not particularly pretty.  It is a dark novel with moments of weak light that shine through and a very dry sense of humor.  Here’s a sample exchange that had me laughing for several minutes – but maybe I’m just strange that way.

[Describing the new ‘Church of Man’:]  “…I once dated a girl who was into this.  She took me to a service.  Everyone held hands and ran in circles, like it was The Sound of Music or something.  And they make you hug people all the time.  It’s creepy as hell.  And you have to confess to your sins against your fellow man — like cutting him off in traffic.  They consider that a sin.  I’m surprised they’re opening a church here.  It’s the most anti-New Yorker set of policies on earth.  You ever see the top of one of their churches?”

“Did you know it stands for ‘teamwork’?”

Like I said, I could just be very strange.  But I found that hilarious.

Recommended for fans of dystopian and apocalyptic fiction, or anyone who likes seeing a conjecture through to its conclusion.  It will make you appreciate even the worst of traffic jams and the longest time you’ve ever spent in a hospital waiting room.  Guaranteed.

This book was reviewed from an advance copy sent by the author/publisher.