RSS
← Is Everyone Hanging Out Without Me? (and Other Concerns) by Mindy Kaling
Why We Broke Up by Daniel Handler, illustrated by Maira Kalman →

The Girl With The Crooked Nose by Ted Botha 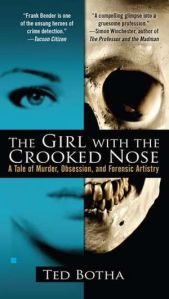 I watch a lot of NCIS, where 40 minutes and one amazingly talented forensic scientist are enough to solve even the most horrific of crimes.  Real life, however, takes longer and doesn’t always yield such clear-cut results.

Enter Frank Bender.  He came upon his calling as a forensic artist almost accidentally, when he attended an autopsy in lieu of taking an anatomy course to help with his sculpting.  In the storage room, there was a body of a woman who had not been identified – he was told, “We have no idea what she might have looked like.”  Looking at her skull, however, Bender realized that he did know what she looked like.  And he asked permission to sculpt a bust of her face.

Five months after he completed her bust, the woman was identified as Anna Duval, a missing persons case from Arizona.

With a successful ID came more skulls needing faces.  Bender learned more about forensic reconstruction and streamlined his technique.  He visited the Mütter Museum to study differences in skulls (and later exhibited some of his completed busts there – leading to the identification of yet another victim).  He set up a studio for his unusual hobby.  And when the Mexican government asked the U.S. for help in identifying some of the more than 400 women killed since 1993, Bender was a natural choice for the task at hand.

This book focuses on Bender’s work in Mexico, with frequent flashbacks to early cases he worked on.  It reads like a biography, a law enforcement account, an unusual artistic journey, and a thriller all rolled into one.  I’m a little squeamish when it comes to dead bodies and the like, but I found it fascinating that an artist was able to help give these bodies names – not to mention giving closure to their families.  (Just another reason to support art in schools, folks!)  The FBI tried using computer simulations, but ultimately concluded that artists like Bender are better at reconstructing human faces – which makes me happy for some reason.

Though Bender’s work was serious in nature, there are definitely light-hearted moments captured in the book.  Anyone who regularly carries around human heads and other body parts is bound to have a few funny encounters to share, after all.  His love for his family also shines through, along with his dedication to helping complete strangers – the victims and their families.

I recommend this book as an intriguing look into a resource used by law enforcement that isn’t well-recognized, as well as just a generally thought-provoking, engaging read.  It manages to explore Bender’s unique talent and the lives of the people he helped without delving into the lurid (which keeps me away from most true crime books).  Add it to your pile!

This book was reviewed from an advance copy sent by the author/publisher.

← Is Everyone Hanging Out Without Me? (and Other Concerns) by Mindy Kaling
Why We Broke Up by Daniel Handler, illustrated by Maira Kalman →