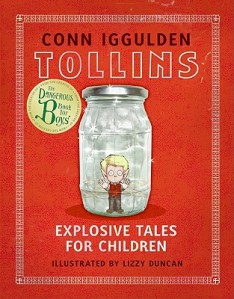 This book is gorgeous.  I knew as soon as I picked it up that it had to be mine.  And it didn’t disappoint.

Conn Iggulden is best known for his Dangerous Book for Boys, a 2007 runaway bestseller that counteracts today’s culture of overprotected children by suggesting “dangerous” activities they might engage in.  Tollins, published in 2009, follows suit.  A Tollin is like a fairy, except bigger and not as fragile.  And by “not as fragile,” Iggulden means that they can be used as an ingredient in fireworks, with non-lethal results.  Fairies are actually used and abused by Tollins throughout these stories.  It feels wrong to laugh at “fairy cushions” and “fairy handkerchiefs,” which are not cushions and handkerchiefs made BY fairies, but rather actual squashed and snotty fairies.  At the same time, well, fairies have had their day.  These stories are about Tollins, and if a few fairies get crushed in the making, it’s hard to be too broken up about it.

Tollins have always led idyllic lives, drinking nectar in the summer and waiting out the winter in underground tunnels.  But when their way of life is threatened by the arrival of a train station, fireworks factory, and other developing human innovations, they must find a way to cope with the changing world.  The book is made up of three stories, all starring a Tollin named Sparkler who dares break the First Law of Tollins: don’t speak to humans.  Granted, what Sparkler says to humans involves the fact that it is not strictly necessary to use Tollins as ingredients in fireworks, but this still gets him in a bit of trouble with the High Tollin.  For such short stories, there manages to be a good deal of adventure, cunning, and humor packed in.