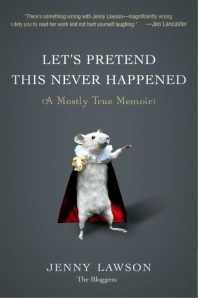 You know that one friend that we all have who insists they had the weirdest childhood? And then when you ask for anecdotal proof, it’s always a wah-wah? Because, seriously. Who among us doesn’t have emotional scars from being raised by flawed beings?

But Jenny Lawson’s claim is not a “wah-wah.” It’s more of a “wha-what?!” Like the time she was chasing her little sister around her backyard and ran into the carcass of a deer cut open, splayed in half, and air-drying on the clothes line. And by “into” I mean ran inside of the deer and came out covered in deer insides. And THEN her father hosed her and the deer down and later served that deer as part of a meal. And then there was this other time where, after being chastised by her younger sister for being “weird” and a bit of loner, she went on a field trip with her class and ended up with her arm stuck inside of a cow’s hoo-haa. Because she was in the process of artificially inseminating it.

I am not making this stuff up, people. And neither is Lawson. And that’s what makes this book so ridiculously good. Lawson really did have an unusual childhood. And she really is an unusual adult. And she’s fine with you knowing that and even judging her. Because she doesn’t have time to care about what you think because vultures are trying to pick at the dead body of her snake-bitten dog, okay?! Or because she’s too busy convincing her husband that Jesus was, in fact, a zombie. Or that having a small, taxidermied alligator dressed as a pirate is worth having, even if it means setting off airport security alerts on the way home. She’s just too busy.

I don’t know. I might just have a soft spot for the weird and awkward. But I think this book puts you in such a shock that you realize that you shouldn’t be shy about waving your freak flag. Because everyone’s got one.

4 of out five coffees. You go, Jenny Lawson.

Posted by ipsedixit on January 2, 2013 in Uncategorized