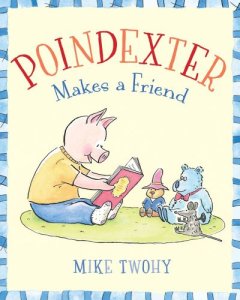 My nephew thinks I bought this book for him.  While he’s somewhat correct — it really is a fun book to read to a child, so borrow one (a child, that is) if you have to — apparently I am still working on my “sharing” skills, because this one lives at my house, not his.

It’s about a young pig named Poindexter who is shy around his relatives and other kids in the neighborhood, preferring to read to the stuffed animals in his room instead of joining the kids outside.  This reminds me so much of my nephew, who gathers his stuffed animals around him during bedtime stories, saying, “Come here, friends!”  (Although he also loves running around outside, but I digress.)  Poindexter is perfectly happy with this arrangement, but how is a well-adjusted, well-read young pig to make friends with other animals that are not stuffed?  He finds solace in the local library, where he sits and reads but also helps the librarian push the book cart and reshelve books.  I was a very happy aunt indeed when I pointed to the picture and asked where Poindexter was going, and my nephew immediately responded, “Library!”

END_OF_DOCUMENT_TOKEN_TO_BE_REPLACED

Posted by Recidivist Reader on July 18, 2011 in Book Reviews, Children's, Must Read, Recommendations