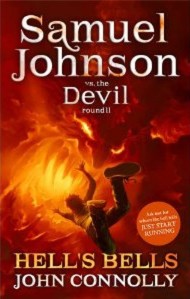 First a quick note: John Connolly’s latest book was released yesterday in the UK with the title Hell’s Bells.  In the US, it will be released in October under a different title: The Infernals.  Who can wait another 5 months, though?  I recommend ordering a copy from the UK today, although this should in no way interfere with your plans to buy the US edition in October.  You can thank me later.

Connolly is best known for his crime fiction series (starring PI Charlie Parker) and the previously-reviewed The Book of Lost Things.  The Samuel Johnson books, however, are more humorous and adventuresome and generally not as dark.  Read these with tongue fully in cheek!

Hell’s Bells is a sequel to The Gates, featuring a boy named Samuel Johnson and his trustworthy dachshund, Boswell.  In The Gates, the Great Malevolence and his minions tried to invade Earth, but found themselves thwarted by young Samuel, the ever-loyal Boswell, and a very minor demon called Nurd.  Hell’s Bells sees Samuel and Boswell lose the home court advantage as they are transported to Hell by a demon who has fallen out of favor after the failed invasion. Along for the ride are a group of notorious dwarfs, a couple of policemen, and an ice cream truck.  Throughout, Samuel’s ordinary life problems (divorced parents, unattainable girls, and the like) are superseded by the demons he encounters and the battles he witnesses.  His perseverance and continued good humor keep these books light, despite heavy subject matter.

END_OF_DOCUMENT_TOKEN_TO_BE_REPLACED

Posted by Recidivist Reader on May 13, 2011 in Book Reviews, Intermediate / Ages 8-12, Must Read, Recommendations