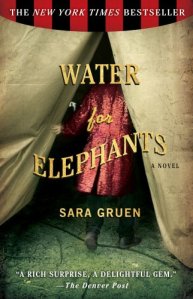 This is one of those books that customers have been recommending to me for years, but I’ve been never felt much of an urge to read myself.  With the movie coming out I figured I would give it a shot, not that I have any particular plans to see the movie, but just to see what all the fuss is about.

We’ll start with the good: Gruen obviously did a lot of research on Depression-era train circuses. She does a good job describing what life on tour with working men, performers, sideshow freaks, and a menagerie of animals might be like.  It’s a very quick, easy read (I read it in two sittings) that moves along at a decent clip.

Some problems I had:

1) Jacob, the protagonist, is debilitatingly passive throughout the story.  He constantly finds himself in circumstances where others take control from him, and he does nothing to stop them.  Other characters make almost all his decisions for him, which is frustrating beyond belief.  For instance, he makes a vow to himself not to let any of the animals be harmed again – but then stands idly by as the elephant is tortured with a hook.  Multiple times.